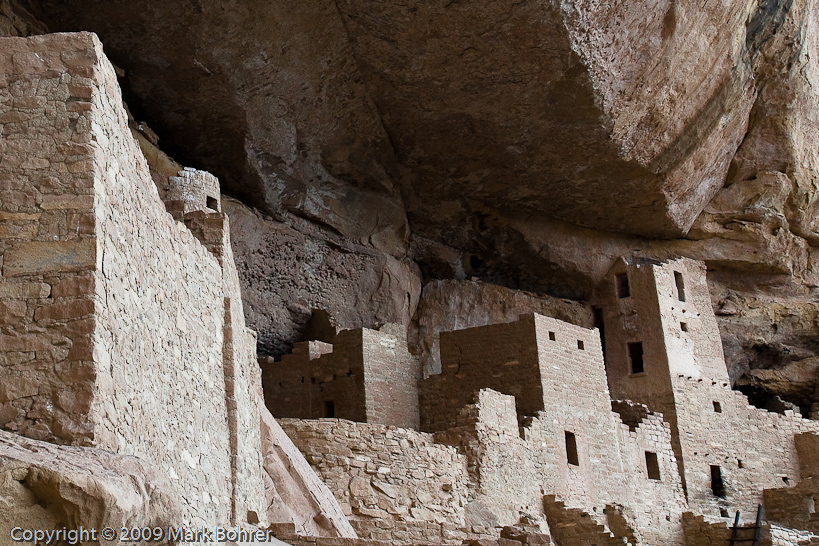 I knew what to expect at Mesa Verde. This was the first major ruin site rediscovered in the U.S. Southwest, and it’s been a national park since 1906. It’s been heavily visited over the years, and that resulted in the present policy that closes most ruins in winter and allows ranger-led tours to a few sites only in the warmer months. To be fair, self-guiding tours are allowed at the Spruce Tree House site in summer. Even there, a ranger is always on duty.

Talk to any interpretive ranger about these policies, and he’ll tell you it’s to keep the resource from being loved to death.

Mesa Verde contains some of the cleanest Anasazi (Hisatsinom) ruins that are accessible to the public. It’s easy to forget that this pristine appearance isn’t the look they had when Richard Wetherill first saw them. Even though they look a bit like a Disneyland exhibit today, they’re still impressive.

I could see how Wetherill and his brother-in-law Charlie Mason could forget all about chasing stray cattle when they saw Cliff Palace in 1888. In photographs from the early 20th century, the place looks like its inhabitants might come back tomorrow.

If you’re lucky, your ranger will ask you why the Hisatsinom who farmed the mesa tops decided to move to sheltered cliff dwellings in the late 1100s. Ranger Peter Newcomb took the question approach, suggesting competition for scarce resources and the need for protection as two possible answers. He was passionate about the ruins and their former inhabitants. That made him an excellent guide. No one has an answer for Mesa Verde’s connection to the Chaco Phenomenon. It may have been an outlier which sent pilgrims to Chaco, or it may have been completely independent.

The Hopi are the most likely direct descendants of the Mesa Verde Hisatsinom. It’s pretty well agreed that modern Pueblo peoples came from the Anasazi, Hohokam and Mogollon of the ancient Southwest.

See all the pictures here.

Shot Notes –
Bring your flash. You’ll want to highlight foreground features, or add a flick of light to ruin walls or cliff overhangs. You may also want to light up kiva interiors. A tilt-shift lens will straighten leaning horizontals or verticals, but careful use of a non-TS-E lens will eliminate most objectionable converging lines.

Archeological Notes
Mesa Verde was inhabited for over 700 years. You can see everything from Basketmaker I pit house structures built around 550 to 200-room pueblos in blocky McElmo-style masonry abandoned around 1300.

Most pit house sites show signs of burning. Their low, wood-framed roofs were too close to heating and cooking fires, and accidents must have been frequent. It’s little wonder the Hisatsinom graduated to kivas and stone masonry.

Other pit house communities are less sanitized than those at Mesa Verde. Chaco Canyon has two of the largest. 423/Penasco Blanco has over 100 structures from the Basketmaker I era, and Shabik’eschee has 70. I hiked to the Penasco Blanco Great House a few days later, but ran out of time to look for the 423 pit house ruins.

Pueblo communities on the Colorado Plateau were abandoned by 1300. Tree ring dating and other techniques show that most sites were occupied for 30 years or less. The Hisatsinom weren’t attached to their houses if the land wouldn’t produce, or the water dried up in drought. They moved on. Some say the environment was a reminder from the gods to wander.