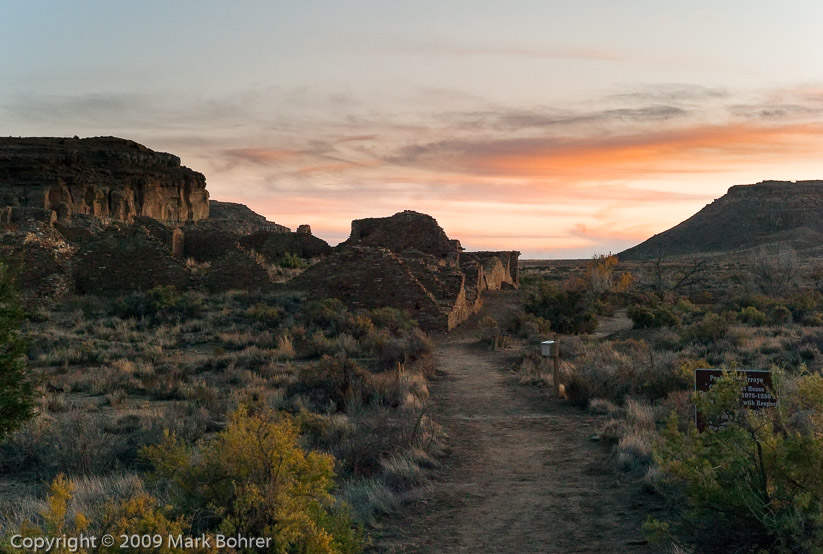 Chaco. To students of U.S. Archeology, that word means 4-story stone buildings before the Spaniards came to America, Great Kivas that witnessed ceremonies we can only guess at, and stone-edged roadways extending in all directions – all this from a people without the wheel, horses, or power tools from Home Depot. There are a dozen Great Houses in ‘Downtown Chaco’, at the center of all the prehistoric roads. Many of them have orientations and features aligning to lunar standstill positions every 18 years or so. Others show markers for sunrise at solstices and equinoxes.

From these clues, we figure the Anasazi must have been ardent skywatchers. Originally, this likely came from the need to time maize, bean and squash planting. Later, it probably evolved into religious ceremonies like the dance of Shalako at Zuni.

Some scholars think the starburst pictograph near the Penasco Blanco Great House marks the 1054 Crab Nebula supernova explosion. The concentric red circles below it may be a record of Halley’s Comet’s 1066 appearance. Still others think these ‘glyphs have no astronomical significance at all, and are just clan markings.

No matter what their meaning was, I had always wanted to see them. I got my chance before my October wedding in New Mexico.

The trail to Kin Kletso and west Chaco starts at mid-canyon. I’d always stopped at Kin Kletso on earlier trips, usually to scramble up to North Mesa and Pueblo Alto. This time, my wife Pat and I continued on past Kin Kletso. We were pleasantly surprised by Casa Chiquita, a small great house probably built between 1100-1150. Its late construction shows in its compact, squarish plan, lack of a Great Kiva, and blocky McElmo-style masonry.

Beyond it on the north mesa walls were several petroglyph panels packed with drawings. Their tight spacing and symbolic style reminded me of Newspaper Rock outside Utah’s Canyonlands National Park. The view of Penasco Blanco on South Mesa kept enticing us down the trail. After a couple hours, we reached the base of the mesa and the nova pictograph I’d come to see.

We were used to the sketchy scramble up North Mesa, so climbing South Mesa seemed like a picnic. Penasco Blanco sits alone up there, the furthest west of all the Chaco Great Houses. Many walls are in good shape, but you’d need archeological training to make out the complete plan.

I finally lost a loose rubber foot on my Gitzo tripod in the ruin. I went back around the site to look for it after I discovered it was gone, but no luck. The Antiquities Act of 1906 made it a Federal crime to remove artifacts from a site, but it says nothing about leaving new ones.

I’ve never camped at Chaco, driving the dirt road out instead at the end of the day. I usually stop to photograph an ‘Oh, wow!’ view in my rearview mirror. This trip gave me another sunset photo op.

Shot Notes
Bring the tripod. You may be able to handhold all your pictures, but composing on a tripod forces you to slow down and think about where everything is in your shot. I call it shot design.

Bring the flash too, and remember the CTO gels to warm it up. Take it off the camera and aim it where you want the light. Canon’s ST-E2 or Nikon’s SU-600 let you work without wires.

Bring your telephoto zoom/long prime. Some ‘glyphs are a bit distant, and you can use 200mm to pull ’em in.

Finally, bring your wide zoom. You’ll find a full-frame 16mm quite useful in the ruins, probably more so than a wide tilt-shift lens.

Archeological Notes
From tree ring dating, Penasco Blanco was one of the four original Great Houses first constructed in the 900s. It featured the ‘D’ plan of early to middle Bonito-phase sites. Later sites like Kin Kletso and Casa Chiquita show a rectangular plan with enclosed kivas and a more fortress-like appearance.