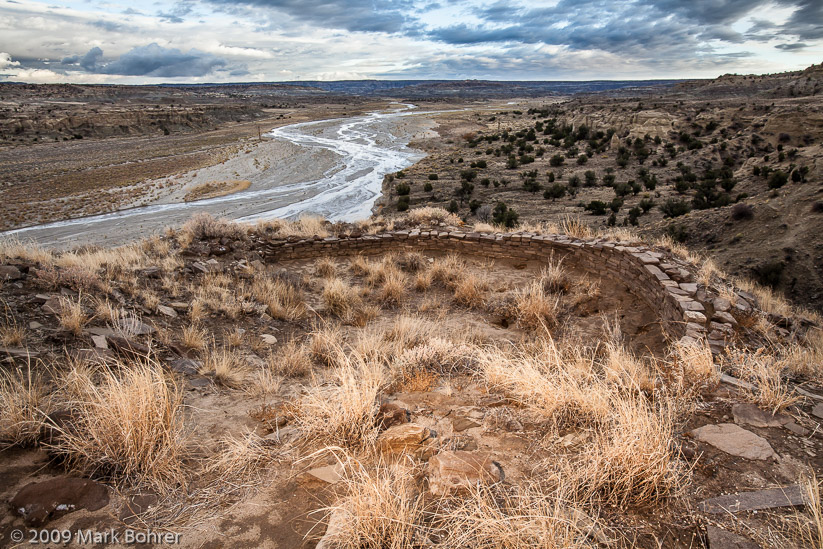 We weren’t lost, but I wasn’t exactly sure where we needed to be. “Hmmm… this could be it. We’re not supposed to drive down into the canyon, so take the left-hand spur.”

Behind the wheel, my wife Pat was understandably concerned with finding something interesting, but getting out in one piece too. “Are you sure? I don’t want to get stuck in the mud again. And I don’t want to drive that close to the edge of the cliff either.”

After nearly an hour of following a sketchy map and a couple wrong turns, we reached the oil platform at the end of the dirt road to Twin Angels, an Anasazi outlier along remnants of the Great North Road from Chaco Canyon. First excavated in 1915 by Earl Morris, the ruin contained two room blocks and two kivas. It got its name from nearby Angel Peak, called Twin Angels at the time. We could only find one of the kivas, but the east and west room blocks were very obvious. This ruin is unsanitized and unstabilized – it appears as the last excavator left it. That’s a refreshing change from the pristine cliff ruins at Mesa Verde, first stabilized by the same archeologist Earl Morris in the 1930s and very cleaned up since.

The site commands unobstructed views south down Kutz Canyon towards Chaco, and climbing a bit to the west yields an almost 360 degree panorama. Twin Angels may have been a waystation guiding pilgrims along the Great North Road to the Great Houses at Chaco Canyon. Solstice and other celebrations may have seen much travel through Twin Angels, Halfway House, Pierre’s Complex and other outliers to Chaco. Shot Notes –
I used an ST-E2 flash trigger in the camera’s hot shoe and a hand-held 430EX strobe for some pictures. A home-brew grid spot focused the light. I would have done better with a light stand or clamp to a tripod leg for the flash, since my hand-held aim wasn’t as precise as I would have liked. I also wanted a 1/2 CTO gel to warm the light output a bit less than the full CTO I used.

My goal was to pick out a wall section as though it were fire-lit, inspired by J. Douglas Morrison’s Photoglyph idea. An incoming storm blessed us with great cloud textures and even light.

Archeological Notes –
Twin Angels was built in the early 1000s, and abandoned by 1300. There is no arable farmland nearby, so it’s thought to have been a rest stop for pilgrims traveling to Chaco along the Great North Road. The North Road probably ran along Kutz Canyon below Twin Angels to the Salmon Ruin Great House farther north. It’s been traced as far as a primitive stairway cut into the lip of Kutz Canyon. Twin Angels lies on a northward meridian from that stairway, so it’s likely the North Road continued to it.