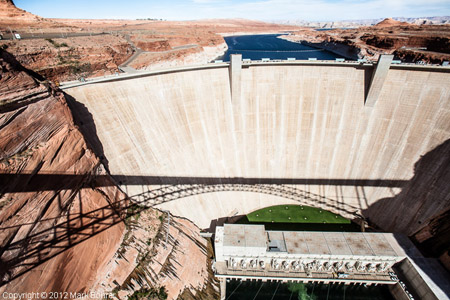 Nevada contains a lot of empty, but if you’re crossing between California and Arizona, it’s brief. Once over that border in Arizona on I15, you’re in canyon country, and things get much more interesting.

But man doesn’t live by rock alone. Our first stop was Mr. D’s Route 66 Diner in Kingman. It was a 1960s time warp, back to when all produce was organic and burgers came from cows. I dripped onions and mustard all over, and loved every minute of it. Yumm!

We made our way to Flagstaff, then south to visit friends in Cornville. Their place sits in a northern extension of the Sonoran Desert – saguaro cactus, prickly pear, scorpions and clean air. Douglas does dog agility training at their MoKe Ranch, when he and his wife Sara aren’t competing in agility events with their Dobermans.

We spent the night at the Little Daisy Motel in Cottonwood. It’s dog-friendly, and we thought it was just the place for our Bernese Mountain Dog puppy Daisy.

After heading north again and turning right at Flagstaff, we passed signs for several tourist attractions in otherwise empty desert. Some of these are overpriced tourist traps ($20 was a bit much to look at a meteor crater for just an afternoon – we passed).

You’ll be much happier paying the National Park Service $10 to enter Petrified Forest National Park. From the entrance off I40, follow the signs to the visitor center and pick up a map. Then start the 28-mile loop road through the Painted Desert. We only made it as far as the freeway, but that was enough to see purples, yellows, reds, oranges and other vibrantly-unusual sand colors. Those colors came from iron and manganese minerals settling in the sand over geologic time. It was well worth the few hours we spent.

When we reached Page, Arizona near Glen Canyon Dam, we stopped at the Fiesta Mexicana restaurant for dinner. It was near enough to Halloween that I had this skeletal washroom attendant. We crossed the Colorado on the bridge at Glen Canyon Dam. It’s been years since I bicycled the Maze District in Canyonlands National Park, when I saw the northern extent of Lake Powell. Time hasn’t mellowed my view much of this finger lake that doesn’t belong there. I understand the need for power generation and water in southwestern states, but wish we could avoid doing it at the expense of natural ecosystems. It did make for interesting photography, showing the intrusion of man in a desert landscape.

Shot Notes
The best camera is always the one you have with you. I captured the interior of Mr. D’s Route 66 Diner with an iPhone 4S and the ProCamera app. The shot lacks perfect tack-sharpness, but it captures the feel of the place.

Lack of time at Petrified Forest meant no hikes into the Painted Desert. I isolated pieces of the landscape from the rim with a 70-200mm f/2.8L zoom on the EOS 7D.

Intuition and experience tell you how many ridges you can pack together in a picture before your viewer gets bored or overwhelmed, and looks at something else. Your best bet is to incorporate objects lying along one or two natural curves in a piece of the landscape. Another way to do it is with a strong foreground object to anchor the picture. That might be a person, a rock shape or a bright-colored plant you light up with fill-flash.

You can get away with shoe-mounted or pop-up fill-flash in a landscape. You just need to reduce flash output 2/3 to 2 stops below the ambient and aim it where you want it. That makes it much less obvious. But you’re better off using angled morning or evening light and choosing selectively-lit compositions. They will always look more natural.