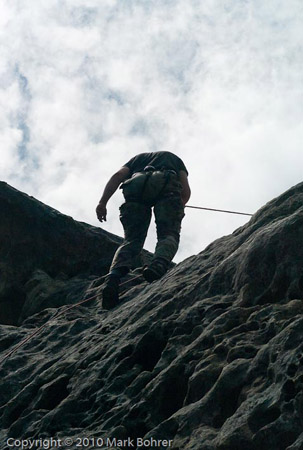 Talk to most rock jocks on big walls at Yosemite, and they’ll tell you they honed their climbing chops at Castle Rock State Park. Castle Rock has great views of Monterey Bay and the Santa Cruz Mountains, and it also has some of the best short climbs anywhere. Four of us took up ropes course instructor David Aguirre on his offer to climb there. When an experienced climber provides the rope, anchor webbing, carabiners, figure eights, ATCs and knowledge, it’s a no-brainer – I’m going.

Goat Rock and much of the park’s exposed stone is Tafone Sandstone, so most climbing routes are full of bucket holds. Castle Rock Falls presents short walls with tighter edges and smear holds, so it’s probably better training if you’re climbing in Yosemite Valley.

I’m not, and was content with Goat Rock’s easier climbs. The ascents and rappels challenged me a lot. It’s tough to see holds when you’re tight against the rock, and relatively inexperienced. The views from the top were stunning, but I’m not ready to pull a Galen Rowell and photograph while dangling from the rope. Hmm, maybe next time.

Climbing provided a great excuse to have fun outside on a gorgeous day.

Shot Notes –
I used a Leica M8 with 35mm and 50mm lenses from ground level, pre-visualizing shots of climbers against a cloud-dappled sky. That’s a difficult exposure situation – you’re going to get either great sky detail and silhouettes everywhere else, or good foreground detail and blown skies.

I exposed for the sky and added or subtracted 1/2 to a full stop for most pictures, using the camera in manual exposure mode for everything. The flash I didn’t have would have filled faces close up, but it also would have given a different look. Had I been shooting editorial, I would have used flash on some pictures to give an editor more choices. My main goal was to tell the story of the day without breaking my neck.