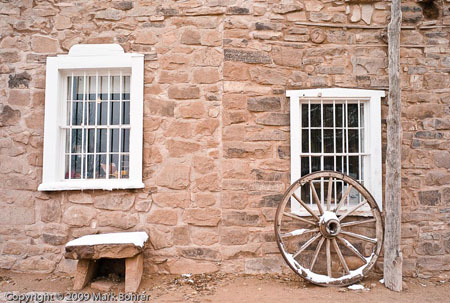 So what do you do after Canyon de Chelly?

Our next stop was Albuquerque, and that pretty well dictated our route from Chinle – U.S. 191 south to Arizona/New Mexico Highway 264, then a short dogleg south on U.S. 491, through the heart of the Navajo Nation.

There aren’t many paved roads here – in fact, there doesn’t seem to be much of anything. But whites and Navajos connected throughout this territory in the 19th century. One of the most beneficial connections came from John Lorenzo Hubbell.

Hubbell bought the trading post that bears his name in 1878. The Pueblo Colorado Wash brought water to the site, making it an important gathering place in the town of Ganado. Hubbell was a natural at business, expanding his stock beyond tobacco, tools and food into wool, sheep and other livestock, rugs, jewelry, baskets, and pottery. He had a major influence on Navajo weaving styles, especially the Ganado-style rug’s diamond pattern on deep red.

Hubbell advised his trading partners on what goods fetched the best price, and suggested they produce things suited to their talent and inclination. His mutually-beneficial trading philosophy made him quite successful for many years. He died in 1930, but the trading post stayed in the family until 1967, when Dorothy Hubbell sold it to the National Park Service.

Hubbell Trading Post still operates today, though a Park Service superintendent once groused that he felt like he was running a grocery store. But there’s much more than food, in keeping with the post’s trading business. You can see wagon harnesses, riding tack, bolo ties in fine silver and turquoise, Hopi Kachinas, and Pueblo pots along with the portraits of presidents who stayed in Hubbell’s guest house. Window Rock is further east, near the Arizona-New Mexico border. The capital of the Navajo Nation gets its name from the distinctive hole in a sandstone fin near the site of the capitol buildings. The site has a monument to Navajo code talkers who played a vital role in covert radio communication during World War II. There’s also a memorial to all the warriors who made the ultimate sacrifice in armed conflicts.

A fountain trickles water from sandstone masonry to a reflecting pool, a beautiful place to think about issues in your own life and what sacrifice means to you.

It was a peaceful ‘time out’ from an active vacation.