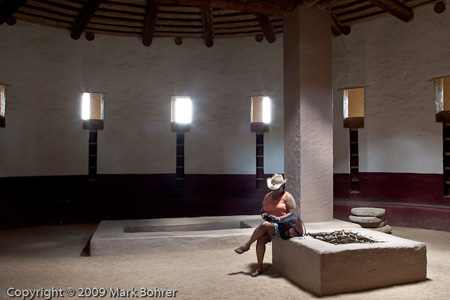 There used to be a few givens for wedding planners.

You set the date. Then you line up the hall or church, and a restaurant for the reception. Arrange the rehearsal dinner the night before. Get the bride’s dress chosen and fitted. The groom is wearing a tux, so his outfit’s a no-brainer. Then compose the invitations and head for the printer, right? October in New Mexico
When my fiancee Pat and I started talking early in 2009 about our wedding, I figured we had a choice of either May or October. I was way too optimistic in thinking we’d have everything ready by May, and Pat wisely suggested October.

I’ve been going to New Mexico for a long time. The clear light, saturated colors, Anasazi ruins, beautiful red rock desert and high-country forests, great food, and friendly people kept me coming back. After I showed her New Mexico for the first time last winter, Pat and I chose the Four Corners-area town of Farmington as the place for our wedding.

Our bed and breakfast hostess in Farmington and longtime friend Diana Ohlson is also an interfaith minister. She agreed to perform the ceremony, but her B&B was too small for our guest list.

Sacred Space for the Ceremony
The Great Kiva at Aztec Ruins National Monument was restored by archaeologist Earl Morris in the early 1930s. I’ve always liked the softly-lit interior that inspires quiet respect for this 900-year-old sacred space, and Pat liked it too. We got a special use permit from the National Park Service to have the ceremony there.

Dinners and Outfits
After several enjoyable meals in many places around Aztec and Farmington, we chose the Blue Moon Diner for the welcome dinner the night before the ceremony, and Three Rivers Eatery and Brewery for the reception dinner.

For the groom’s outfit, well, I’m not a tux kind of guy. Pat likes my black cowboy hat and boots, and they fit the venue. I’ll also be picking up an 1880s-style frock coat, shirt and silk puff tie. We’re shopping for Pat’s dress this weekend.

Invitations Are Easy
And those invitations – Pat composed the text, and I provided graphic design and photography. Adobe’s InDesign CS2 lets you place and flow text around graphics and pictures, and allows arbitrary placement of any object on your page. I’ve used it a lot for copywriting clients.

I cut and pasted Pat’s text into InDesign and adjusted the paragraph formatting and text block placement. Next were four photographs, added with InDesign’s Place command. When I first started with InDesign, I found Place to be very non-intuitive – what the heck does THAT mean? It’s just like the ‘Insert’ command that’s not there.

For the photographs, I picked two interior images from Aztec Ruins. Pat chose a picture of the moon rising above Kin Kletso in Chaco Canyon, a shot I captured on my first visit to Chaco in 1994. She also picked a picture of the two of us kissing outside Three Rivers Eatery and Brewery. I angled and aligned all four pictures to lead the eye down to the right. At least one corner of each picture aligns with a line of the centered text. Everything is visually anchored so the reader’s eye doesn’t wander aimlessly across the page.

InDesign exports files to Adobe’s ubiquitous PDF format. I attached the PDF file of the invitation and an information document on where to go, eat and stay in the area. I composed an HTML-format cover email in Adobe Dreamweaver CS3. Then I used Gammadyne Mailer to assemble the mailing from the HTML, personalize it from the Access database of our guests, and email it out to everyone with one click.

That was the quick notification, already a bit later than we’d have liked. I’ll use Microsoft Word to merge Access data into envelopes I can print, print out the invitations on nice paper, and mail hard copies to everyone.

That’s the easy part. Now all we need to do is get everything else to come off on schedule!