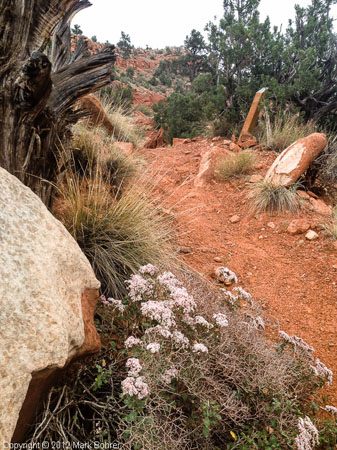 What do you do for an encore, especially on vacation? When you reach the destination of your driving trip and it’s way-out-there incredible, it’s hard to get excited about your return. I hadn’t thought much beyond getting to Albuquerque’s International Balloon Fiesta, then watching and photographing it with my wife Pat. We’d seen great red rock sandstone in Nevada, stopped to visit friends in Arizona and Farmington, NM, and gotten close to wolves in Gallup on the way. I’d thought only of taking the most direct way home. Fortunately, Pat wanted to see something different.

North To Southern Utah
So we went north across the Colorado River into Utah. To me, Grand Staircase – Escalante National Monument was something declared by Bill Clinton in 1996, a big chunk of rocks south of Moab, Canyonlands, and Bryce Canyon National Park. I’d never seen it and didn’t know what to expect.

It was an amazing treat – a visual feast of orange, pink and vermillion colors in starkly-eroded sandstone you approach up close. We drove from Page to Kanab, Utah, pausing to watch constantly-changing light shadow the land, courtesy of local storm clouds. There was the abandoned Pahreah / Paria townsite, used as a movie set between 1924 and 1975. We stopped at the dirt road entrance but didn’t enter due to storms and flash flood danger. We’ll have to go back, but it was worth seeing the surrounding country from the entrance.

The mountains changed constantly as we drove closer to Kanab. One shadowed thumb shed its dark summit, revealing a white cap dotted with conifers. Approaching Kanab, you come in more and more intimate contact with the surrounding red mountains. You finally enter Kanab on a narrow plateau, part throwback to small towns of the 1950s, part modern tourist destination.

Up The Squaw Trail
The town hosts one of Grand Staircase – Escalante’s visitor centers. From there, they directed us to the Squaw Trail north of town for a hike. Since BLM administers the National Monument and surrounding land, dogs are allowed on trails. After a complimentary continental breakfast at the Best Western, we leashed dogs, donned raingear, and went up.

The trailhead was actually easy to find on the north end of town. The ascent led into drip-castle layers of red rock. Wildflowers punctuated the deep red with wildly-contrasting greens, whites and yellows on this rainy October day. There were a few steep pitches, but the trail was mostly an easy scramble up, even with two curious dogs in tow.

We admired fantastically-eroded sculptures and cliffs of sedimentary sandstone, the first part of a giant staircase that gives the National Monument part of its name. Much of Utah and the Four Corners was a large inland sea and tropical bog in past geologic time. Over that time, tidal forces deposited many layers of sandstone in what became the Vermillion Cliffs, one of the middle ‘stairs’. Many uplift episodes exposed the overlying country rock to erosion, leaving behind today’s red sandstones. As photographers and non-geologists, we still marvel at the intensely-saturated colors.

We started in intermittent drizzle, but it turned to rain as we gained elevation. Mindful of our safety on slippery rock, we turned around and headed down before it got too heavy. The area is definitely worth more hiking and exploration, so we’ll be back.

Headed out of town, we discovered the Moqui Cave. This is a friendly tourist trap displaying Anasazi artifacts and fluorescent minerals collected in the area. It’s been operated by the same family since 1951.

Today’s dSLR systems are very water-resistant, unlike film SLRs of days past. I left my digital Leica rangefinder camera at home, since it doesn’t shed water nearly as well. Canon’s EOS 5D mark II, 7D and 60D all use the same battery and lens systems, more reasons for bringing only recent Canon gear.

We were lucky with dramatically-cloudy skies for backgrounds. I still needed to look for cloud texture, or minimize boringly-featureless white sky. The lack of prominent shadows also made me look for other ways to show depth. I used figures in the landscape or strong foreground elements to give scale, and draw the viewer’s eye into a picture.

Composition in desert landscapes is a balancing act. With interesting color contrasts and shapes everywhere, you need to choose elements to tell your story. Sweeping scenics tend to overwhelm your viewer, and hide details even on large monitor screens or prints. I tend to avoid them, usually choosing smaller pieces to suggest the larger landscape.